Whether you're looking for a getaway to the sunny streets of Spain or an opportunity to further your career in the bustling avenues of New York, there is so much the world has to offer. Open your mind to just some of the things you can learn about the various corners of the world by checking out our article below!

The world can seem like such a thrilling place. From the bustling streets Rome to the serenity of the Amazon rainforest. Every step you take offers the opportunity to discover and expand your knowledge. As a student in my final year of college, I have been thinking about travelling more and more. The options for this next chapter in my life are incredibly endless and so very varied. Just a few days ago I was looking at one-way flights to cities like Singapore and Toronto. Although I won't be deciding on anything right now, even the possibility of adventures such as these makes my hair stand on end with excitement.

In a busy square in Rome, there sits The Fountain of the Four Rivers. It is one of the few places in the world where so many different people on the planet seem connected for a moment. Whether it be the many faces of the world coming together to embrace the ancient Roman beauty of the Piazza Navona. Or the representation of rivers from four of the world's seven continents. It is in thinking about these four continents that I begin to wonder what exactly it is I can learn from these vastly different corners of the world. Having watched Susan share her reflections at this inspirational monument, I began to reflect on the lessons that I've learned from the many corners of the world. 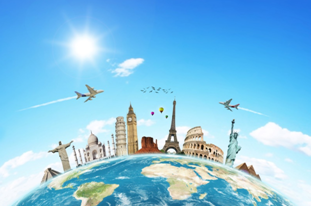 Let's start where many of us will be familiar. For me, this is a place of culture and passion. I think of exploring many European cities, all of which boast grand museums and jaw-dropping architecture. However, it is only when you enter the streets of cities like Berlin and Dublin, where street art is as well respected as a collection of paintings in an art gallery.

It's difficult to imagine that the graffiti you may see on your daily commute can be held at such a level. This is exactly what we should be looking at. These are the artists of the future, a possible investment opportunity into the future of modern art. The European passion for culture is something we can learn much from. I have learned to take that passion and direct it towards my career, making work not feel so much like work but more like a pastime or hobby.

Being a college student working my way through college means that for me visiting an Asian city is something I can only plan to do in the future. Although when I think of Asia or even when I discuss Asia with Friends, the discussion tends to always come back to the topic of diversity. With Asia being the most populous continent in the world, it is easy to see how so many different languages and traditions have come to fruition over its long history. Familiarising myself with just some of these diverse traditions has opened more doors than I thought possible, from friendships to creative writing inspiration.

Embracing a continent such as Asia can get complicated.  With each city having its own set of 'social norms', exploring this part of the world brings with the opportunity to learn how different cultures hold different values. At Savvy Teens, we were invited to present to a variety of students across Hong Kong in 2018 and we brought home a variety of reflections about Chinese teenagers. Personally, I know that I would love to visit Shanghai and Beijing as soon as I get the chance.

The United States, boasting an incredible 16 million self-employed people, is often associated with enterprise. I grew up with the idea that the United States was the place to be to suceed in business. For me, this continent is a place where opportunity is plentiful.

There are many things to be learned from the endless list of successful entrepreneurs both from America and those that have moved there to achieve their own version of the American Dream. There is no end to what is achievable if you are willing to work for it and what better place to do that than the land of endless possibilities.

In fact, we can help you to convince a foreign employer you're perfect for the job here on our blog.

African heritage is renowned for its intricate and immensely impactful history. With between 1500 and 2000 native languages, it is no surprise that Africa has a rich history. A lesson to be learned from this populous continent is having perspective. This continent has such a vastly different and difficult history compared to others,I sometimes forget how geographically close we are to each other with such different histories.

I realise that the perspective I have on this part of the world today is majorly constructed through the lens of social media. Not only has this means of communication connected me to friends and family, but also to those whose lives seem so distant and different from mine.

Having perspective can mean that you are aware of the differentiation you have over others in career and education. With this perspective,I feel more confident that 'the world is your oyster', as they say when it comes to achieving your dreams.

The world beyond this screen holds many opportunities for you and your future. Whether it's roaming the streets of your bucket list European city, train-hopping around the diverse cities of Asia, planning the future of your career in the sleepless streets of New York, or seeing the rolling hills of the African safari for yourself, get yourself out of the place you're in. Put yourself in a position where the stories you share of the world we live in come from your first-hand experience.